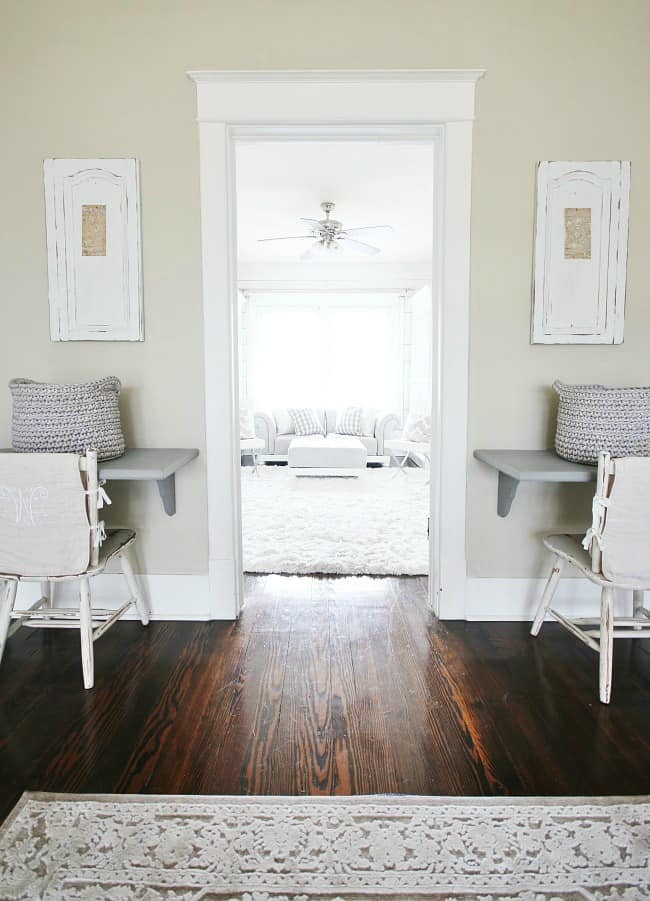 And two desks and two walls.

This wall is the first thing you see when you come up the stairs to the top of the landing.  You can see it from the outside at night when the lights are on through the giant window over the window seat.

I liked this look, but I wanted the wall to stand up and be counted.

I wanted it to represent.

I wanted it to think it was kind of a big deal.

In other words, I wanted built-ins. 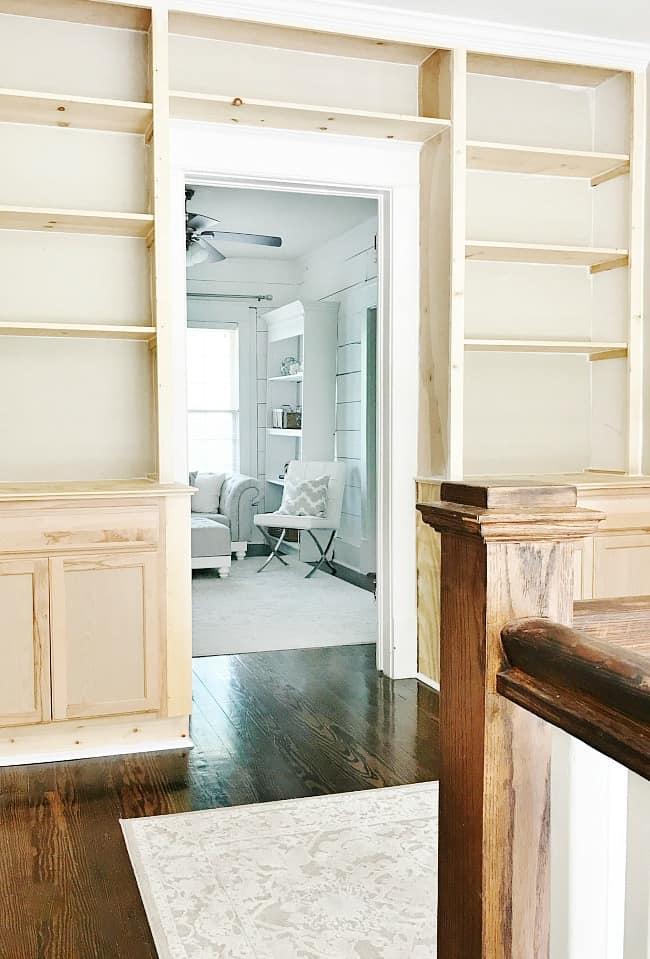 The built-ins filled the wall. 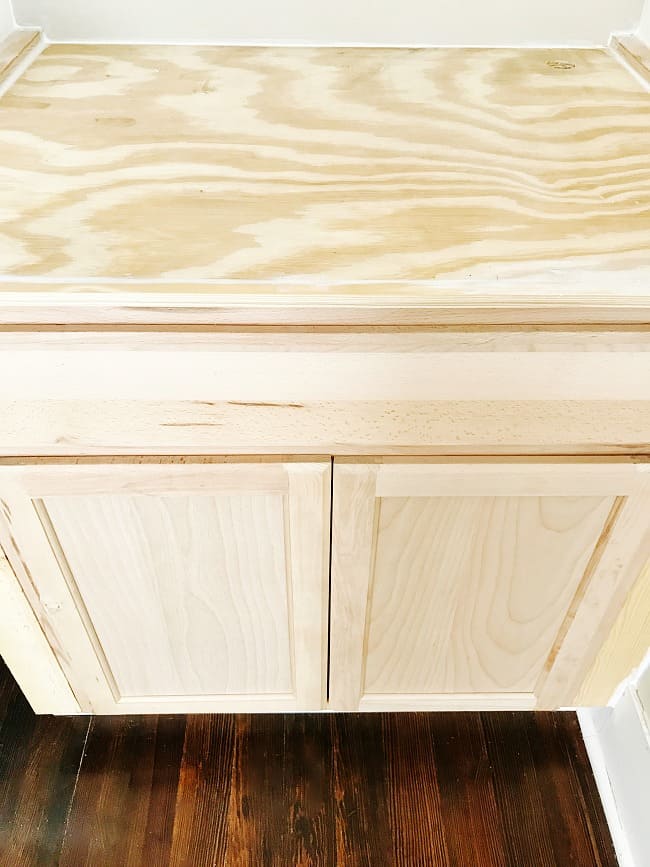 They were built on top of off-the-rack cabinets from the home improvement store.

Wood planks were added to the size and the top to create shelving on both sides and over the door.

The next step was to paint it.  I couldn’t decide if I should go gray or maybe just gray in the back or all white or maybe a patterned wallpaper on the back of the shelves.

But in the end?

After trying different things and different looks, I went all classic.

All white to match the moldings. 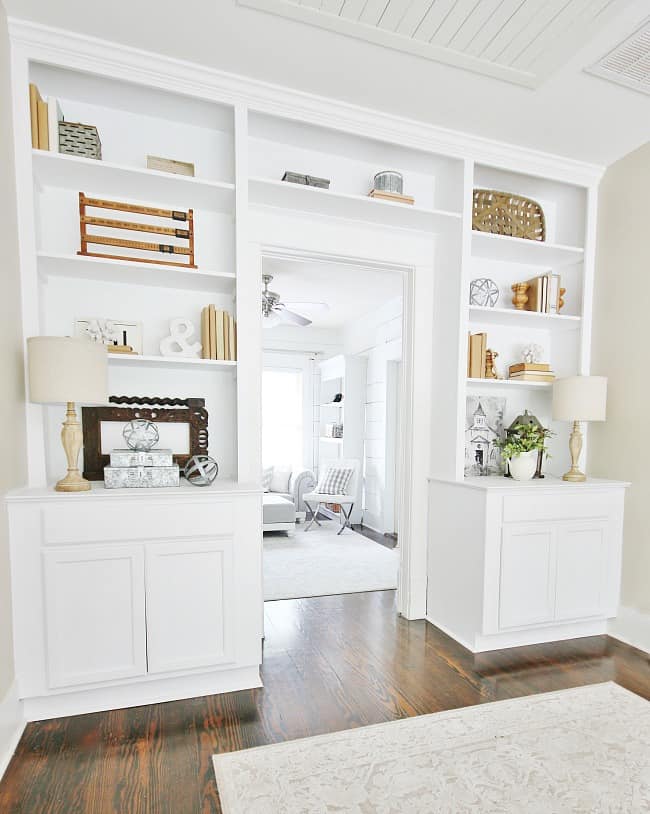 I love how they look like they have always been here.

I’m still deciding on hardware and maybe (possibly) (not sure yet) painting the backs.

I have to live with it a little and see if I want to be friends with the gray. 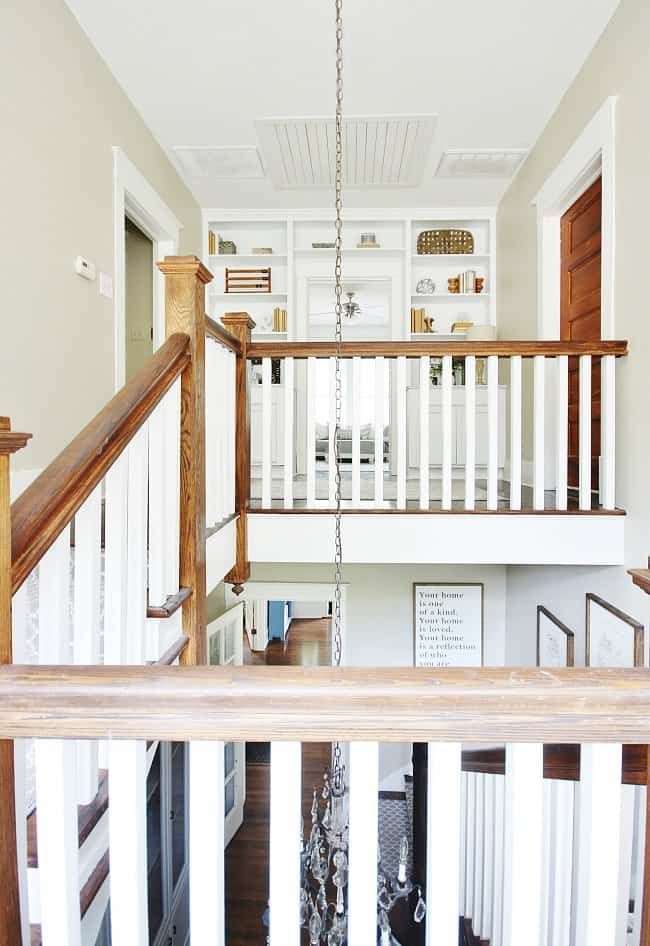 Here’s the view when you come up the stairs.

I LOVE IT SO MUCH.

But here’s the best part.

BECAUSE I DIDN’T HAVE TO PAINT THE BOOKCASES.

I was standing here looking at these bookcases when then looked like this.

Wondering when I could fit in the time to paint them.

I had a deadline for the next book and curtains to sew and an entire photo crew coming to my house.

I didn’t have a single painting minute in the schedule.

I had the most brilliant idea on the planet. 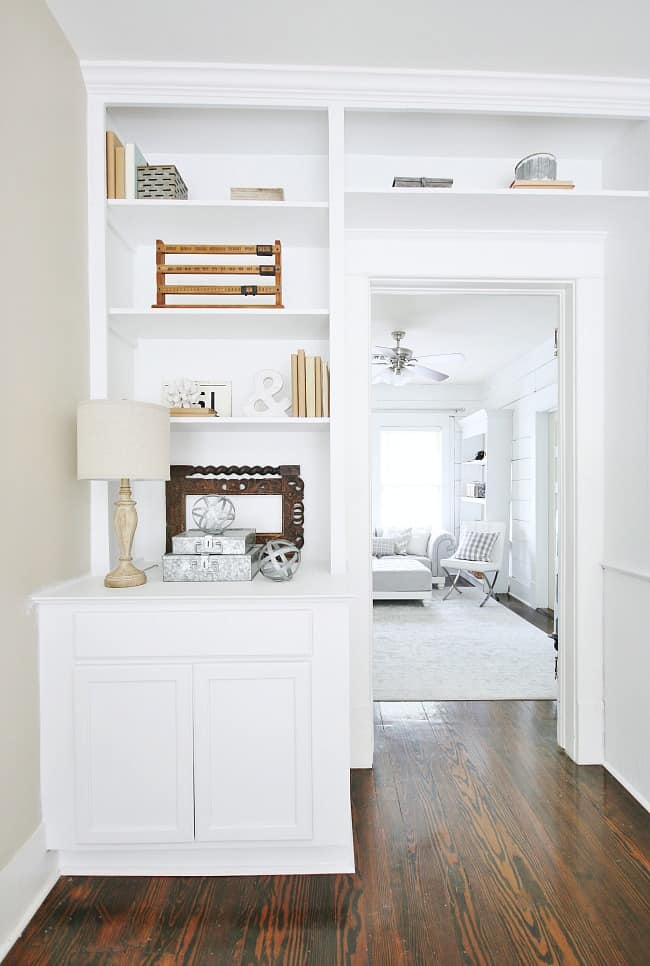 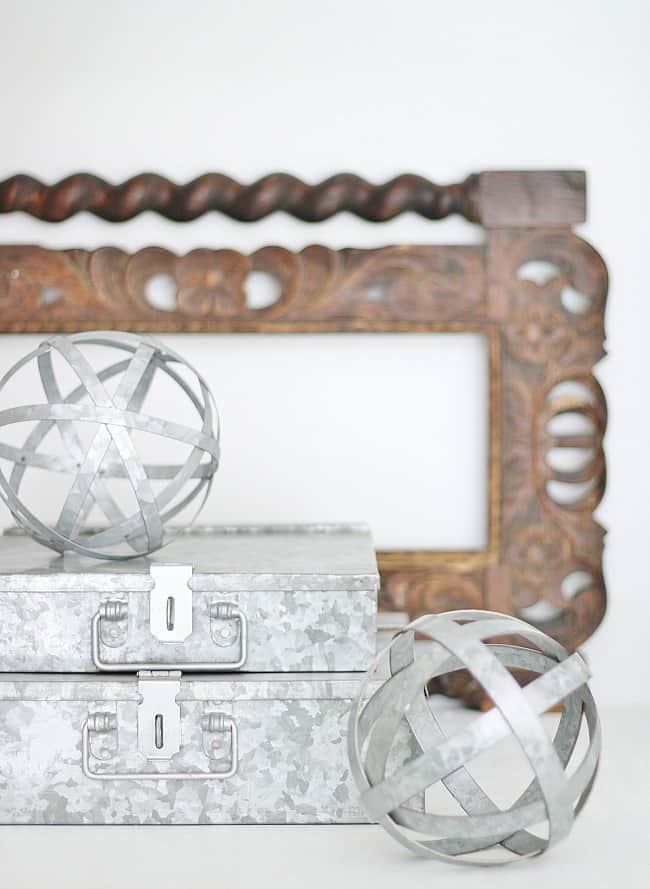 I went all Mark Twain and came up with a painting contest.

I took the twins by the hand and led them into the landing area and gestured toward the bookcases.

“Which one of you is the faster painter?” I asked.

“Who do you think could paint their side of the bookcase the fastest?” 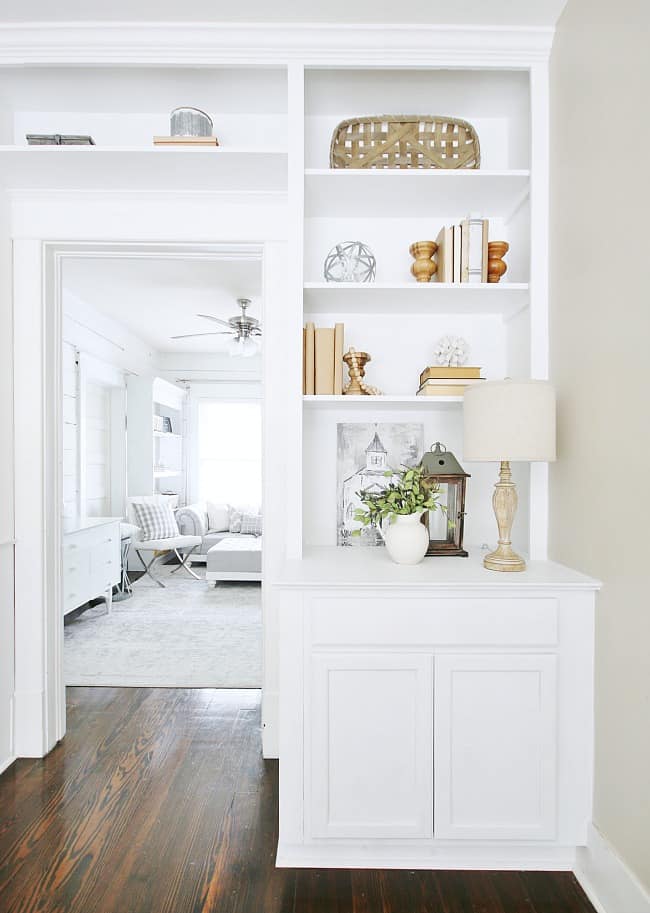 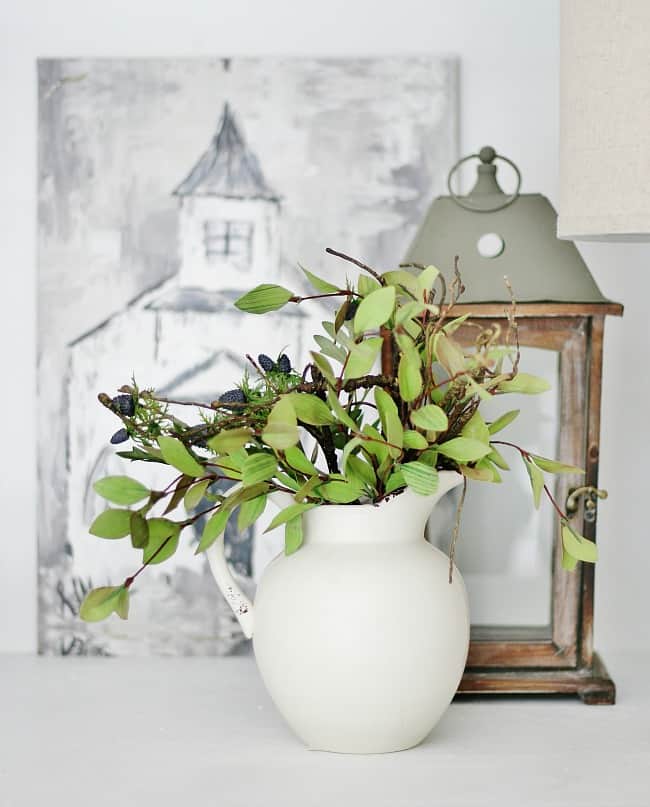 Westleigh told me she was faster.

And then this is where my plan fell apart.

Whitney told me Westleigh was faster, too.

If you know Whitney, you know that she never wants to hurt anyone’s feelings.  She’s always rescuing someone.  She’s always sitting by the lonely person at the lunch table.  She makes extra lunches for friends.  She saves up her money to buy extra school supplies for people.

I love all those things about her.

They are wonderful traits.

But now?  I needed a little competition.

So I upped the ante. 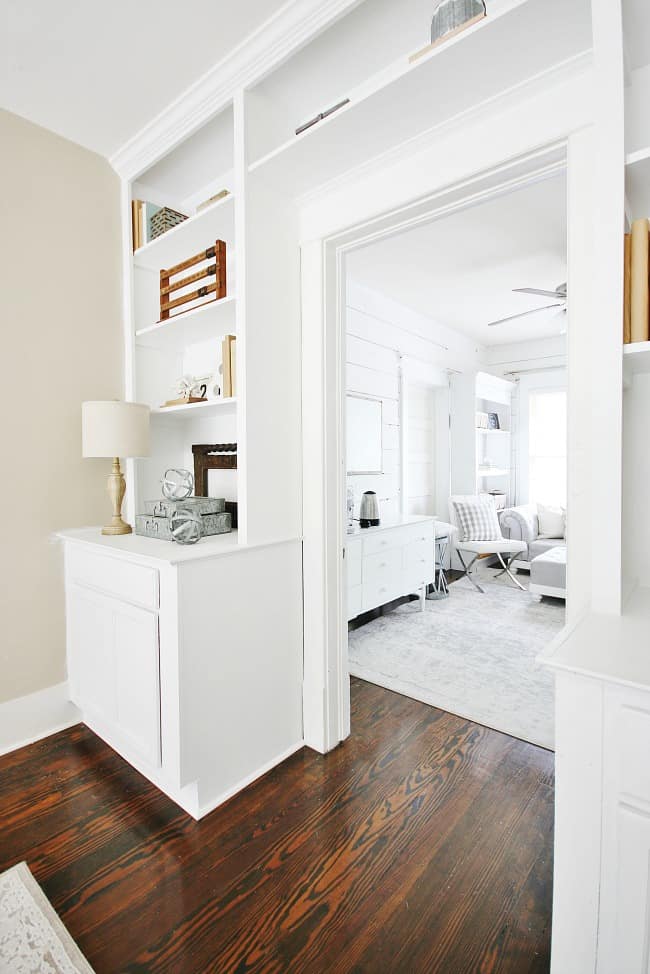 “First finished bookcase side gets a new pair of the flip-flops that lace up,” I said.

Nothing makes a brush paint faster than a new pair of summer sandals. 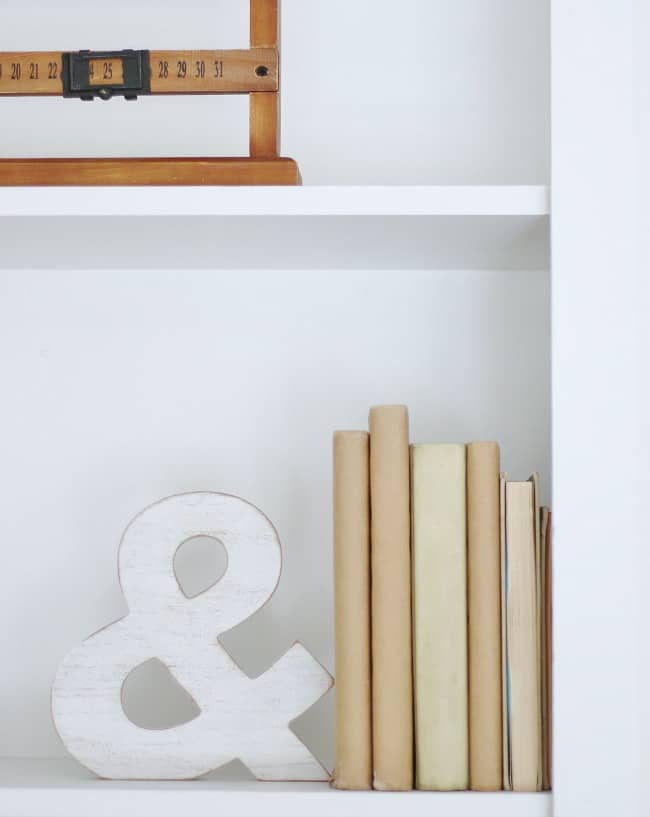 And so it was that amidst laughter and giggles and paint drops and Taylor Swift, two bookcases got painted.

I never learned who finished first.

I was downstairs and walked up the steps to see two completed bookcases and two sisters wearing paint clothes and bandanas standing arm in arm.

And so they did.

I wasn’t sure which made me the happiest.

The smiles on their faces.

Or the fact that they crossed the finish line together. 🙂 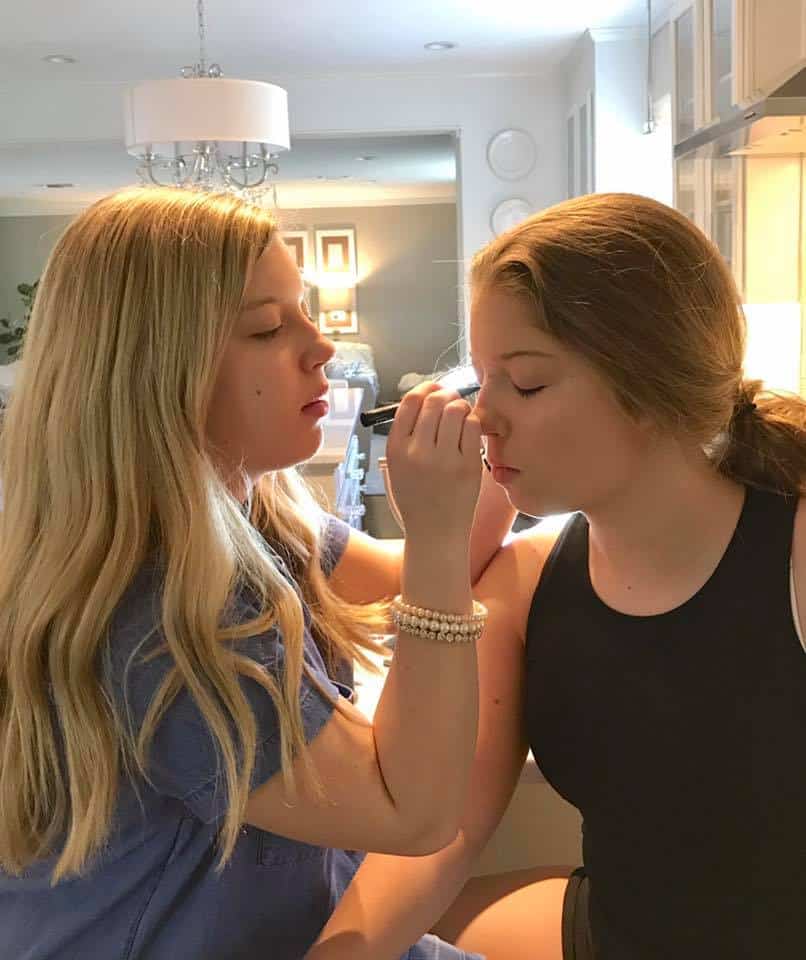 PS  If you are ever in the neighborhood and happen to see two blonde-haired twins wearing matching flip flops….

….now you know the rest of the story.

PPS  This isn’t the first time they’ve crossed the finish line together.

Here’s another story for your morning coffee. 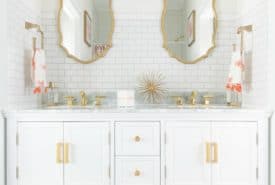 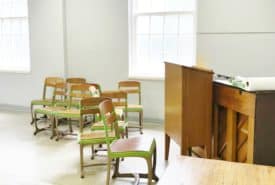 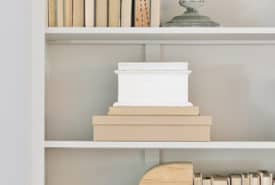 Before and After Farmhouse Hutch