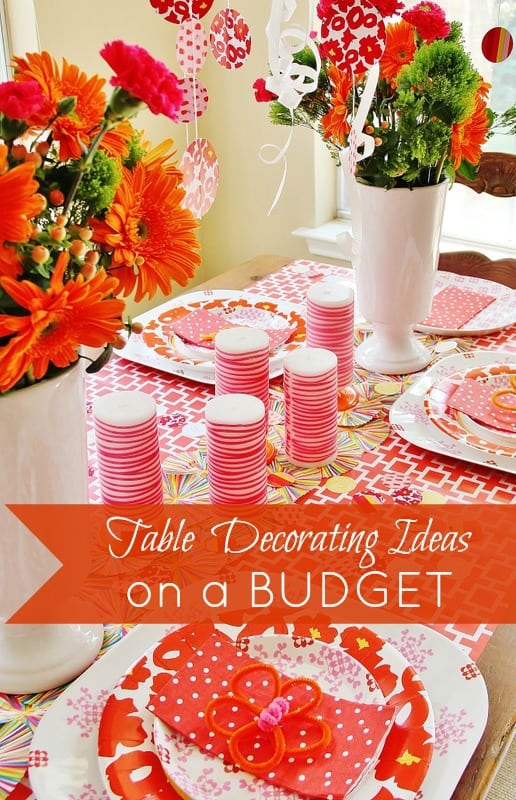 We just got back from vacation yesterday.

And somewhere around mile 726….my husband and I started talking about clever ideas to hide the flat screen television.

I told my husband that once on an old episode of Oprah…..she was on this over-the-top liquid diet and pulled in all that fat in a wagon into the studio and totally looked so amazing in these skin-tight blue jeans.

Sometime after that …..she gave a tour of her house.

And in her bedroom there was this cabinet when you pressed a button….the television slowly rose up from the center with a whirring sound that resembled an episode of the Jetson’s.

She just pressed a button and there was the television.

I can still hear the gasp of the audience. 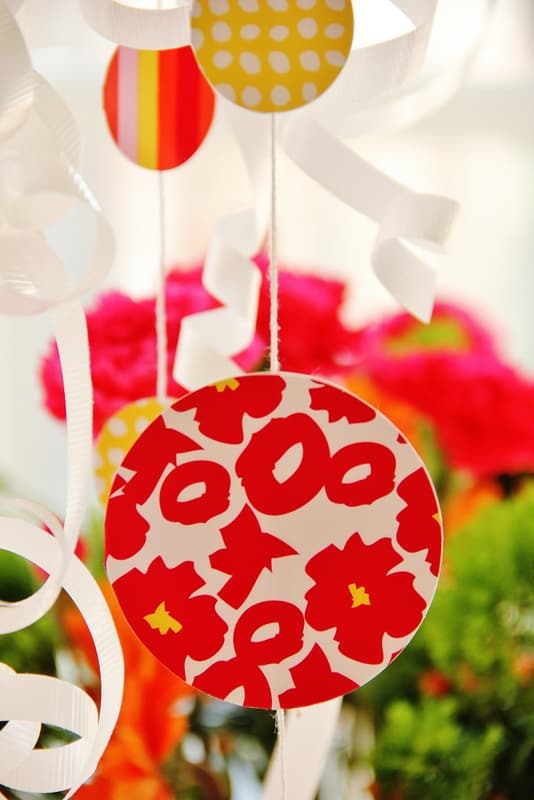 It took me until mile 738 to explain all this to my husband.

10 miles of waving my hands around and random whirring sounds while I attempted to mimic the television slowly raising up….

….until he finally got it.

Then he started making suggestions of his own.

“Maybe we could make something like that,” he said excitedly.

“Or maybe we could have the television slowly lower itself out of the ceiling.”

Mile 739 flew by and thought to myself how lucky I was to be married to him.

A television coming down out of the ceiling?

I was so excited that I jumped up and down in my seat. 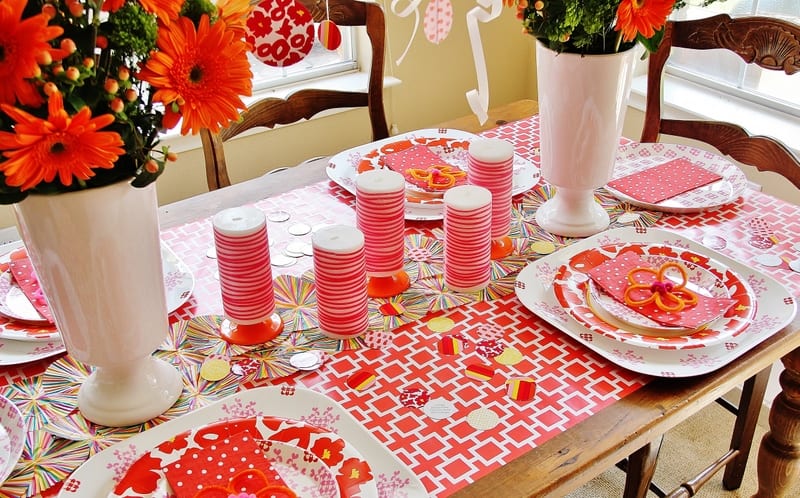 Mile 740 sped by as visions of televisions suspended from the ceiling and tables with hidden buttons danced around the car…..

Expectantly I turned to him and waited.

Waited for a better idea than a ceiling television.

He paused as if the idea was so amazing that it needed an introduction.

“We could take the television….and hang it on the wall….and…..and….

A frame around it?

But he wasn’t done.  He continued.

“We could put a frame around it and hang venetian blinds in front of the frame…..

…..and lower and raise them when we wanted to watch television.”

Budget decorating at its finest.

The whole venetian blinds in front of the television thing…..

….I bet the Jetson’s never thought of that. 🙂

For some much prettier budget decorating ideas….here’s a few tips and ideas for decorating a table on a budget. 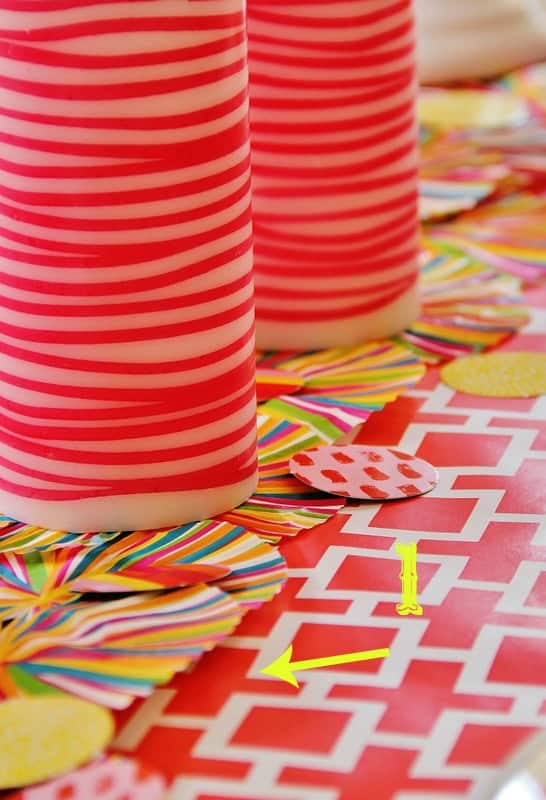 1.  I made a center runner on the table from colorful cupcake liners.

It took a package to make it.

I just cut a diagonal line out of one side of the cupcake liner until it resembled Ms. PacMan.

Then I taped them together with washi tape. 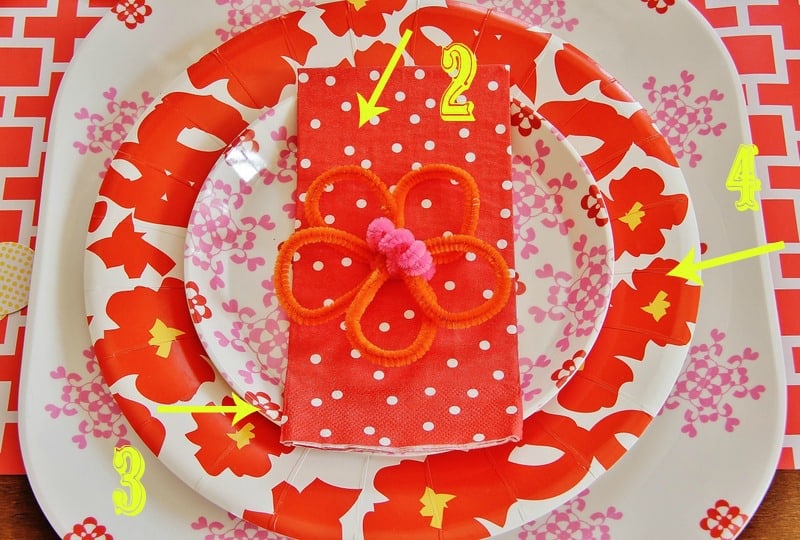 You could use as a place card holder.

4.  I mixed patterned paper plates with melamine plates to give a bright pop of color. 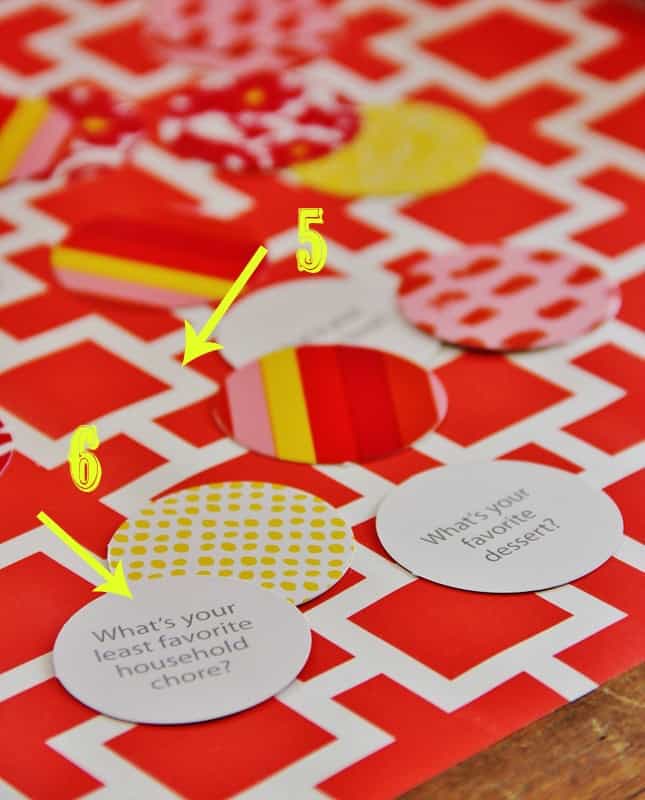 5.  The center runner on the table is just wrapping paper.

I love the graphic design and super easy clean-up.

6.  I found these fun tags in the gift aisle.

It’s the perfect party game….each tag has a question printed on the back.

If your store doesn’t have them….you could just make your own from scrap-book paper.

Just in case you were wondering…. 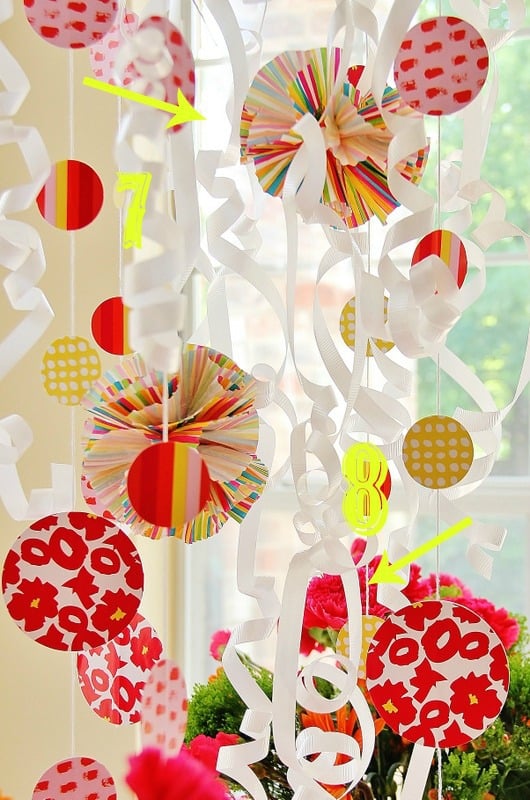 7.  I also made the fun hanging decorations from the cupcake liners, too.

And then hung them from the chandelier along with more tags hanging from strings. 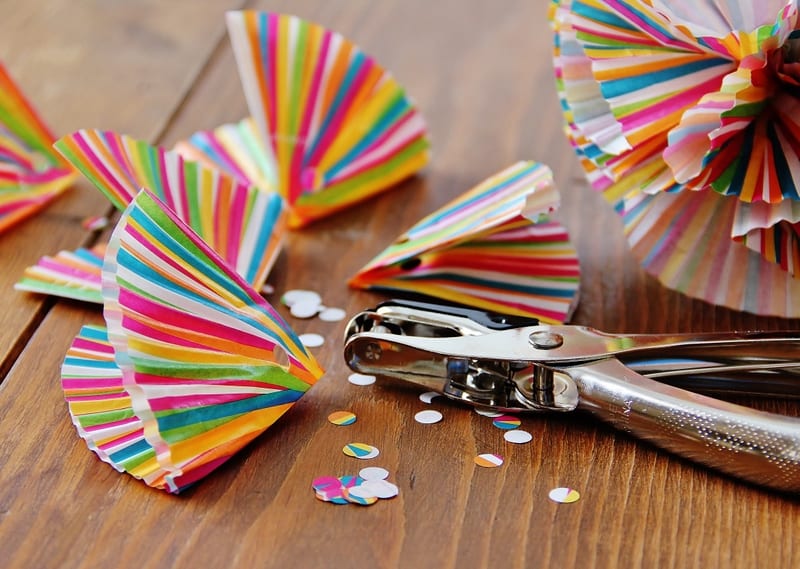 To make the decorations….I folded the cupcake liners in fourths.

Then I punched holes and threaded a pipe cleaner through and fluffed.

Each mini decoration cost about .20.

8.  I also draped ribbon I curled from the chandelier.

Table decorating ideas on a budget.

Easy and fun and perfect for a summer party. 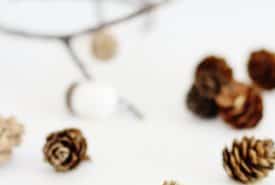 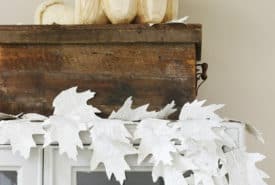 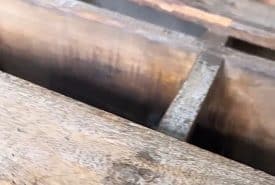 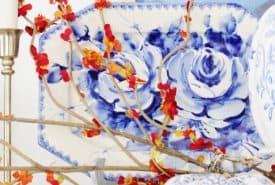